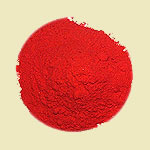 You can give cash, gold, fruits and flowers as offerings to Shri Mahalasa Narayani. But She can be pleased with a devotee with only a very simple offering of Kumkum (vermillion). The devotee’s faith is more important than his offering.

Shri Mahalasa wears a Jannuve or Yadnopavita or the Holy Thread? This is rare for a Goddess!

Shri Mahalasa Narayani is supposed to be a very Jagruk Daivat (Vigilant Deity) even in these modern times. Prayers to her, if performed from the heart, seldom go unanswered. Ever since this website was launched we have received several e-mails vouching for this fact. Some of the e-mails are really very touching.

Many of the prayers, stuthis and stotras devoted to Her are not only pleasing to listen to, but also have a profound impact on the listener. These are but ways of reaching out to Her. Anyone who calls out to Her is sure to receive Her attention. 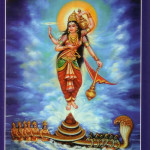 The Charitra of Goddess Mahalasa Narayani, authored by His Holiness Guruji Shri Suresh J. Pai (of Shri Mahalasa Narayani Devi Kshetra, Harikhandige, fame), came as a direct command from the Goddess, who appeared to him in the course of a dream.

By reading the Charitra, one can conquer his six internal enemies like lust, anger, greed, pride, etc. Not only that, many devotees have immensely benefited from it, spiritually and otherwise. Miseries can be overcome and the human existence becomes meaningful. Indeed by reading it, a devotee can get closer to Mother Mahalasa!

The Charitra is available in English, Kannada and Marathi versions. To  know more about the Charitra and the correct way of reading it, click here.

Among the many stotras dedicated to Shri Mahalasa, the most interesting is the Kavacham, which means shield or armour. The Kavacham is respectfully regarded as having the powers to protect one from all evil, illnesses and a host of problems. One can recite the Kavacham or listen to it to get mental peace and satisfaction. The Kilakam stotra has to follow the Kavacham.

Then there are those who keep printed versions of the Kavacham in their breast pocket as a virtual shield! And, rarely do these people face any major problems…

While every day is important, Sundays hold a special significance. Sunday is supposed to be Shri Mahalasa’s day! And it is on this day every week, week after week, that the Palakhi Seva is performed at Mardol. Shri Mahalasa’s idol is taken out in the Palakhi, or palanquin, and around the temple to with songs and bhajans.

The Palakhi Seva is an affair not to be missed. At other temples too Palakhi seva is performed on special occasions.

It is also said that if you happen to be at a temple where Her Palakhi is to be taken out (generally this happens in the evenings), you are not supposed to leave the temple without taking part in the joyous occasion.

While our prayers and poojas are offered only after taking a bath, when we visit the temple after a long and tiring journey, we are supposed to enter these temples and give Dhool Bhet (coming in from the dust, to mention in a literal sense), thanking the Gods (in the order mentioned above) for making this journey possible and so on… After this is done, one can go to the temple’s residential rooms and take a bath and refresh oneself! Only then can the services be offered.

The most important days of Utsav (festival) are during Navaratri which falls during the first fortnight of Ashwin (Ashweeja). This is a time when all Her temples are packed with devotees flocking from all over to receive Her blessings and partake in the communities activities. At Mardol, the Jatra or Jatrotsav is another important event, usually during the month of Magha. 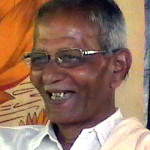 Shri Mahalasa Narayani’s temple at Harikhandige (click here to visit website) is unique in many ways. Apart from its location among splendorous hills and forests, She is celebrated here in the form of Van Devata, the Goddess of the forests. However, the main attraction for many devotees here is the adhyatmik (spiritual) philosophy propounded by His Holiness Guruji Shri Suresh J. Pai, who emerged out of a classic guru-shishya tradition. Here, Guruji — also known as The Singing Saint — advises his followers to concentrate continuously on God and avoid the temptations and pitfalls of the material world. Guruji’s aim is the enlightenment of our society through spiritual awakening.

It is amazing that Shri Mahalasa Narayani Devi Kshetra, Harikhandige, is one spiritual centre where the direct participation of devotees — along with vaidiks and priests, or individually — is wholesomely encouraged in many poojas and yajnas and on special occasions. On certain days, the devotees themselves can perform the Kumkumarchana at Her feet or perform the full pooja, including Abhishek seva, to Lord Gurudatta at the spritually powerful Datta Peetha.

Shri Mahalasa’s Kulavis and Mahajans belong to the following “four and a half” Gotras (a form of lineage that is unique to a particular family among Hindus. A boy and girl from the same Gotra cannot marry, because they are considered to be siblings):

(You may note that there are five Gotras mentioned but the intro said “four and a half”: Vatsa Gotris, for reasons not known, are considered to be half Gotris.)

Shri Mahalasa is worshipped by a large section of the Hindu society. Her Kulavis are mainly Gowda Saraswat Brahmins. Other include the Daivajna and Karhade Brahmins, who also consider Shri Mahalasa to be their family deity. Interestingly, they too are from the above-mentioned “four and a half” Gotras. Then, there are some Vaishyas (traders) Sonars (goldsmiths) and so on, who also follow Shri Mahalasa.

Lord Parshurama’s instructions to the devotees of Shri Mahalasa is: She is to be worshipped during the nine parts of the day, namely,

She is to be worshipped by reciting 24 names:

And, says Lord Parshurama, “She will fulfill all your wishes.”

Blessed be the devotees of Mother Mahalasa with peace and happiness in their spiritual and material life and let all their wishes be fulfilled by Shri Mahalasa Devi. We pray at the Lotus Feet of Shri Mahalasa Narayani for the well-being and prosperity of all the visitors to this website.