Experience of a Seeker 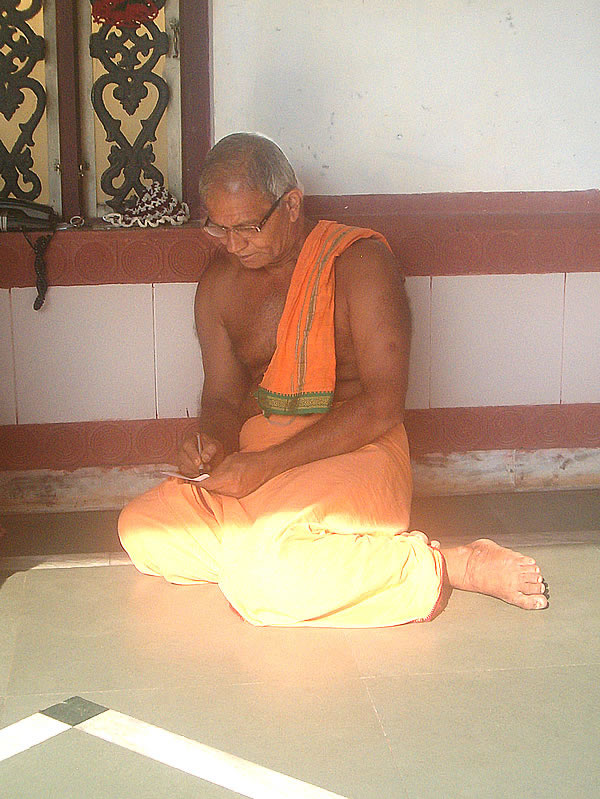 Nowadays, as the thirst for spirituality arises, many people, among them our own community members, are lost when it comes to knowing who a true Guru is. I have seen them attending the discourses of many so-called Gurus, who later tremendously disappoint them and such people then lose faith in our religion.

A close family friend, the progeny of a priest’s family of a major GSB temple in Dakshina Kannada, became a follower of Asaram bapu. Asaram got into trouble and most of his followers quickly deserted him.

Secondly, many consider our GSB Swamijis as Gurus. They are our Samaj leaders, rather than Guru in the true sense.

Then who is a Guru? While Vidya’s link provides many answers, yet allow me to relate my own experience.

I never realised the importance of searching for a Guru, leave alone the importance of one. I concentrated on service to my Kuladevata, Shri Mahalasa Narayani and got the opportunity to serve Her through http://www.mahalasa.org, the website that I launched more than a decade ago.

Born and brought up in Bombay, my professional career as a journalist took me Hyderabad and Dubai. After being in Hyderabad for several years, I had decided to settle down there and accordingly purchased two-three plots.

Also, during the course of my career, I was introduced to many “gurus”, spiritual quacks, tantriks, etc. Many of them seemed to be genuine, but I never got attached to any of them. Even then, I did not realise the need for any Guru.

But Mahalasa amma had Her own ideas for my future. Thus developed the idea in my mind of settling down not in a big city, but a small rural surroundings.

After leaving Dubai, I got the offer of a senior position in a major newspaper in Bangalore; I was tempted to take it up. But the moment I landed in that city, I was jolted back to the idea that big cities were not for me, not Bangalore in any case. Hyderabad or Bombay were far better cities.

Anyway, it so happened that finally I took up a place on rent in Manipal. After searching high and low, I purchased a plot in nearby Parkala and constructed a house there.

Since my prime interest was Mother Mahalasa, I got the opportunity of visiting Shri Mahalasa Narayani Devi Kshetra at Harikhandige, about 22 kms from Udupi. I had visited the temple once during a vacation trip from Dubai in about 2002. After coming to Manipal, I did visit the temple several times, but could not do so on a regular basis.

During the initial visits to that temple, I saw that many people were falling at the feet of the Dharmadarshi of that temple, one Shri Suresh J. Pai, that too within the temple itself. I felt a bit odd, since I did not see any such scene at any other temple of my beloved Kuladevata. Many devotees were even calling him “Guruji”.

Anyway, with whatever limited interaction I had with Shri Suresh Pai, I found him out to be a very down-to-earth, simple, soft-spoken, genial human being. Many people came to him to seek advice, some just to share their thoughts. Many times I found him in the temple campus, either with a broom in his hands, or a pickaxe or a shovel, always keeping himself busy with some or the other work.

It was much later that I realised that he was no ordinary human being, but a Guru sent by Lord Shri Mahalasa Narayani for the benefit of Her devotees, to show them the true path to Her devotion.

It also dawned on me that my coming down to Manipal/Parkala was no ordinary episode. Many small and big things started happening which frequently took me to Harikhandige. It was indeed our beloved Mother calling me. However, these calls directed me to the feet of Shri Suresh Pai, and on Her prompting, I have realised in him my true Guruji!

Materially, I may not be better off, but mentally I am at much peace now. Of course, I am but in the playschool or pre-KG, yet to even begin the ABCs from him.

Originally from Sirsi Shri Suresh J Pai had settled down in Goa and was a lecturer in a commerce college. He also was associated with the Goa GSB association and as a Mahalasa Kulavi, was a frequent visitor to the Mardol temple. He also led a group which was into bhajans and anushtans at Mardol, as well as other temples of Shri Mahalasa Narayani, like the one at Kumta.

Also, he was very much into spiritual activities and performed many havanas and yaags at Mardol and elsewhere frequently.

Around 2002, he decided to build a small community hall at a central location so that his group from many different places could regularly perform bhajans,poojas and havans etc. They got a place at Harikhandige for this purpose.

But the gracious Kuladevata wanted something more than just a community hall. In his dream, She directed him to construct a temple for Her. Thus the Shri Mahalasa Narayani Devi Kshetra came into being. In that scenic rural hamlet, where now many devotees vouch for many miracles, apart from Shri Mahalasa’s temple, also came up temples to Shri Hanuman, Shri Ganapati and Shri Mahadeva, Navagraha and Naaga.

As the temple grew, so did Guruji’s fame. But Guruji never performs any miracles like other so-called Godmen. He only talks and advises only if asked. He is like many social reformers, who is against alcoholism, tobacco consumption and the like. He has set up a high school for local children, who otherwise have to travel to far off places to study. He also does not believe in the “Bhar” or the “Darshan” being performed at many temples and advices his devotees to avoid them. Ditto as regards our Swamijis.

Another thing about Guruji, he does not believe in soliciting donations. He says, since She asked the temple to be set up, whenever She desires, the money or material required would automatically come. Secondly, there is no rate card for performing sevas at Harikhandige. You can pay whatever you can afford. Because, this is not a kirana shop or a departmental store.

Yet, many first timers who come to Harikhandige, go back and transfer significant amounts without being prompted or asked for anything. And, they do not expect anything in return. Not even their names on any marble or metal plaques. These true devotees only serve God, not their false egos.

Guruji Suresh Pai came out of the adhyatmik tradition, being a disciple of his Guruji in Panaji, Goa. He is also an ardent devotee of Lord Gurudatta, the Trimurti avatar of Lords Brahma, Vishnu and Maheswara.

Many people who are into the adhyatmik tradition and have visited Harikhandige say that the Datta Peetha at Harikhandige emanates with such vibrations as seen only at Ganagapur.

Personally for me, serving my Kuladevata is the most important thing. But on Her directions, obeisance to Guruji has become even more important. Not that he has asked anything from me nor expected anything from anyone, except more dedication and devotion to Shri Mahalasa Narayani and continuous guidance to get out of the pitfalls of this material world. Guruji’s ultimate aim is guide his followers towards true spirituality and towards moksha from the cycle of life and death!