|| Even by the very sipping of the charanamruta (the water with which the feet of guru are washed), we get blessed by the eternal wealth (of liberating knowledge), and which dries up the endless ocean of seeking & the subsequent sorrows. My Salutations to the lotus-feet of that glorious Gurudev. || 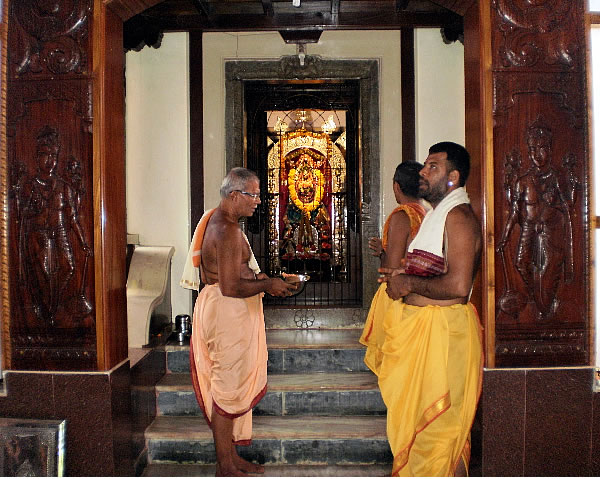 Due to reasons way beyond our control, our popular website went offline during the last almost 2 years.

Our Daily Panchang and Events e-mail, which was being received eagerly by a lot of subscribers, too stopped.

The website was attacked and the DP&E mails were getting repeatedly blocked. I also lost my job.

I went into depression.

Then one day, I had to be hospitalised. For about two months.

In the first hospital, my condition started deteriorating and late one night, I was shifted to the Critical Care Unit of a corporate hospital, where they diagnosed me as having pneumonia.

The next morning, the doctors said that I had suffered multi-organ failure and declared my condition as critical. At best, they said, they would keep me under observation.

As they put it, my heart, lungs, liver, kidneys were gone. My brain was functioning sub optimally. I was almost like in a coma, but became conscious once or twice for short periods. During once such period of conciousness, my wife briefed me about the situation and what doctors had told her. I whispered to her: “I want to die at home” …and then I closed my eyes.

Due to unemployment for a long time, there was no income. The hospital bills were rising alarmingly. Death would have brought us relief…

The hospital initially refused to discharge me. My wife explained about our financial situation and told them she wanted to take me to another hospital where we could get discount based on a community health card. They agreed. Once in the ambulance, she gave the driver the directions.

One senior doctor who had stepped out, had a doubt and looked at her askance. She confessed: “I am taking him home.” Tapping her on her back, he said: “I think you are taking a wise decision”. Because by then, I was reduced to being almost a vegetable and physically looking like a skeleton.

As the ambulance started, my wife made me say two words, which came out hoarsely as I was barely conscious:

And the Ghar Wapsi commenced…

Once we reached home, all life-saving paraphernalia was removed and I was laid on the bed. All medicines given by the two previous hospitals were stopped.

All had given up hope.

But the Mother of this world had not. Our beloved Mother Mahalasa.

Today, as I look back, well on the way to a full recovery, it was simply due to Mahalasa Amma’s sheer grace and surely due to Guruji’s blessings, that I survived.

Perhaps they had in mind that I should continue my service via the website, http://www.mahalasa.org in Her name and the Daily Panchang & Events mailer.

Guruji told me that a lot of people had mentioned to him about how they were missing both the website and this DP&E mailer.

Many of you, dear subscribers, missed my humble offerings and prayed for me. My wife and I thank each one of you from the bottom of my heart!

(It was only much later that we came to know this: One of my wife’s cousin was told by a Vasai-based oracle that due to their (my wife’s and mine) services to Mahalasa Amma and Guruji Shri Suresh J Pai at Shri Mahalasa Narayani Devi Kshetra, Harikhandige, Mhalshi Amma brought me back; I had already died that day.)

Another incident comes to mind. As I was lying on the bed the next day after coming from hospital, semi-conscious, my wife took the cellphone and connected to Guruji. And He spoke to me. His mellifluous voice was the life-saving medicine that I required badly and which set me on the path to full recovery.

Here, doctors and locals claim having seen a miracle: A lot of people had come to see me while I was bed-ridden after being brought back from hospital. Today, they see me riding my scooter, going about errands and moving about as freely and as normally as before.

Last week Guruji told me to remove all doubts from my mind and not to hesitate, but go ahead with the service that I had been doing since 1998.

I had lost all my files, and the backups which I downloaded from the servers were all corrupted. I had to start from the scratch. But then the Mother had her ways and helped me along the way. In three days I re-created the main website http://www.mahalasa.org as well as the extremely popular subdomain http://harikhandige.mahalasa.org. Work is still on and requires a lot of improvisation.

A sudden bout of fever, cold and an almost unbearable headache during these three days (which was either sheer coincidence or Her ways to test me) could not deter me. I worked day and night.

And it was my wife, Rohini, who was always by my side, giving hope, encouraging — and always talking about Mother Mahalasa and Guruji — who also contributed in prompting me to begin this work again.

At the end, I must note that it was my wife’s prayers and her rock-solid faith in Mother Mahalasa and Guruji, that I am alive today. Perhaps if she did not take me out of hospital that day, I would surely never have come back. One day, of course, I will have to leave this body, but now I have to do this Seva, and I hope that when the end finally comes, I will attain Moksha, the ultimate a human being can desire.